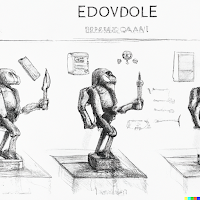 Not all ideas are good ideas.  In fact, the majority of your ideas will not be good.  When it comes to building software, it doesn't make much sense to build out a prototype of a new idea with all the best practices a full fledged software product requires.   This is why we rapidly prototype software for a new feature, or product.  We want to validate the idea as quickly as possible. This is the whole philosophy behind the minimal viable product or MVP that start ups are always talking about.  But MVP doesn't just apply to startups.  There are ideas that can be prototyped in the biggest companies that could save the company employees hundreds of hours of time, or millions of dollars.

So, you decide your idea might have some merit. You meet with the team, and list out the core, minimal features.  Everyone is on board, and your team has the green light to build a prototype.   Now, the hard decisions start to pile up. 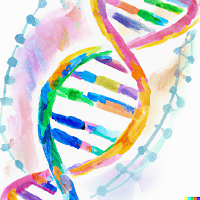 It's tempting to over-engineer.  Our developer DNA is encoded to produce secure, scalable, and performant software.  When trying to get a prototype out the door, there will be many decisions where we seemingly go against our better judgement.   This is expected, but these decisions are not typically documented and revisited.

You take shortcuts in some areas.  Maybe you are storing data on disk, and not backing it up. Maybe the UI is bare bones.  Maybe there is one hard coded user that uses basic authentication.  It doesn't matter what the shortcuts are in each specific case.  The prototype has been released into the wild at a fraction of the time and cost it would have been to develop it to your highest standards. You keep iterating, and your prototype starts to resonate with the intended audience.  This is a good thing.  The idea is validated, and your team prepares to launch the prototype as an internal tool, or maybe a customer facing feature or product.

You may lose control of your prototype. It may get co-opted or inherited by another team.  The team may start to receive pressure from management or sales to push a product out the door faster than was originally expected. This is still a good thing.

With your prototype getting more eyeballs and use, questions start to appear.  Why did you choose that datatype?  Why didn't you follow our best practice guide for logging and observability?  Why is there no admin interface for the support team? After you've been through this once or twice, you start to pad your estimates, and defensively code.  The time to get an MVP out the door gets longer, and your ability to iterate quickly suffers.  This is a defensive CYA (cover your ass) approach.  If your prototype was inherited by another group, and they question your decisions, you could gain a reputation for writing poor code, or making poor design decisions.  You may even get defensive about your decisions and find yourself explaining the history of the project over and over, to various people in different roles. This is a bad thing.

After seeing situations like this arise in various companies of various sizes, I drafted the Prototype Maturity Model.  You can think of it like a grading rubric that you might have received in primary school.  The twist is that there are no "bad" grades.   The model is simply a tool that you and your team use to stay on the same page.  When you are in the initial phases of developing an MVP, you can look at the rubric and decide which areas you want to focus on, and which areas you can skimp on.  Every few weeks, you and the team can grade your prototype.  This gives you a snapshot of the prototype maturity over time.

Now, assume your prototype has been handed off to another team without much notice.  You can point them to the model, and your ongoing snapshots of its maturity.  This allows them to understand the decisions you made without necessarily listing each and every one.

The PPM also works great as a way to discuss risk tolerance with managers.  The model brings to light the gaps a software product may have.  It also plainly lays out the path to all stakeholders of what must be done in order to get the prototype within everyone's risk tolerance before a full launch. Take a look a the aspects and ratings below, or view it in Google Docs in matrix form. (Please, feel free to copy, and modify as you see fit!)

One or more engineers can give their opinion, and reasons for their rating should be detailed.  This will help them know what rating to give when revisiting on a regular basis, or if another team picks up the project.

Let me know what you think!  If you have any questions about the model, or thoughts / insights / shared frustration with this sort of thing, let me know!
- Andy Glassman
LinkedIn
Twitter

Here are the aspects and ratings that I have personally used for various projects:

Popular posts from this blog

Write Admin Tools From Day One 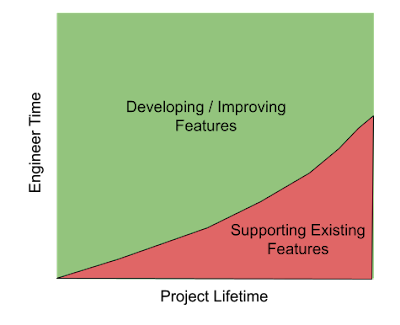 The Problem Writing useful features for your users is key to a successful product.  It makes sense then that you should maximize your time writing features for those users.   This approach is very effective at the beginning of a product's life, but over time, you may find you are spending more time maintaining the product that developing it. Some of the biggest development time sucks can be: Tracking down the cause of unexpected behavior. Fixing data. Answering user, or team member questions. Running maintenance scripts, or other ad-hoc tasks. The "Oh #&@$" Solution These small support tasks start to add up, and there is no easy way to offload the work to product, or support.  You and your development team reach a breaking point where you must start prioritizing administrative tools. Unfortunately, you will slow down your new feature development even more in the short term.  It will take time for those tools to be developed, and take effect to lower your support load.
Read more 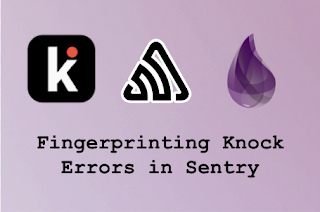 At SwayDM , we use the fantastic Knock platform to define notification workflows, and deliver emails, and SMSs to our users. Our codebase is written in Elixir , and we use Sentry for error reporting via sentry-elixir .  One thing you can do with sentry-elixir is report an event to Sentry every time your app logs at the error level.  You can also specify which metadata logger keys are forwarded to sentry as metadata attributes. This works great in conjunction with Knock, but if you only log the error, all your Knock related issues in Sentry will be grouped as one, regardless of which identify, or workflow caused them.   This is where custom fingerprinting comes in. Configure Sentry First, configure sentry to define a module, and function to be invoked before the event is sent to Sentry. You must have the Sentry LoggerBackend configured.  If you want to pass logger metadata to sentry, you must explicitly add it to this configuration. Capture Logger Metadata Capture details in the logge
Read more